How I Setup A Private Local PyPI Server Using Docker And Ansible. [Continues].

In this post, I will try to detail how to set up a private local PyPI server using Docker And Ansible.

After my initial research, I wanted to ensure that the deployment is deterministic and the PyPI repository can be torn down and recreated ad-hoc by a single command. In our case, a simple make pypi deploys an instance of PyPI server through an Ansible playbook.

Ansible Playbooks offer a repeatable, re-usable, simple configuration management and multi-machine deployment system, one that is well suited to deploying complex applications. If you need to execute a task with Ansible more than once, write a playbook and put it under source control. Then you can use the playbook to push out new configuration or confirm the configuration of remote systems.

You can read more about Ansible here

The setup is divided into two sections, Containerization and Automation.

This post-walk-through mainly focuses on automation. Go here for the containerisation.

I didn’t want the post to be too long.

See The How for the justification of opting for Ansible for the automation.

If you already have Ansible installed and configured you can skip this step else you can search for your installation methods.

Ensure dependency plugins have been installed as well.

In this section, I will go through each file in our pypi_server directory, which houses the configurations.

Certain settings in Ansible are adjustable via a configuration file (ansible.cfg). The stock configuration is sufficient for most users, but in our case, we wanted certain configurations. Below is a sample of our ansible.cfg

If installing Ansible from a package manager such as apt, the latest ansible.cfg file should be present in /etc/ansible.

If you installed Ansible from pip or the source, you may want to create this file to override default settings in Ansible.

Selecting machine to run your commands from inventory

Ansible reads information about which machines you want to manage from your inventory. Although you can pass an IP address to an ad hoc command, you need inventory to take advantage of the full flexibility and repeatability of Ansible.

For this post, I will be using a Vagrant box.

Vagrant is a tool for building and managing virtual machine environments in a single workflow. With an easy-to-use workflow and focus on automation, Vagrant lowers development environment setup time, increases production parity, and makes the “works on my machine” excuse a relic of the past.

Vagrant will isolate dependencies and their configuration within a single disposable, consistent environment, without sacrificing any of the tools you are used to working with (editors, browsers, debuggers, etc.).

Below is a Vagrantfile, used for local development which you may use, you would just need to run vagrant up and everything is installed and configured for you to work.

Thereafter run the following command which allows you to install an SSH key on a remote server’s authorized keys and it facilitates SSH key login, which removes the need for a password for each login, thus ensuring a password-less, automatic login process.

Once the vagrant box is up, use the ping module to ping all the nodes in your inventory:

You should see output for each host in your inventory, similar to the image below: 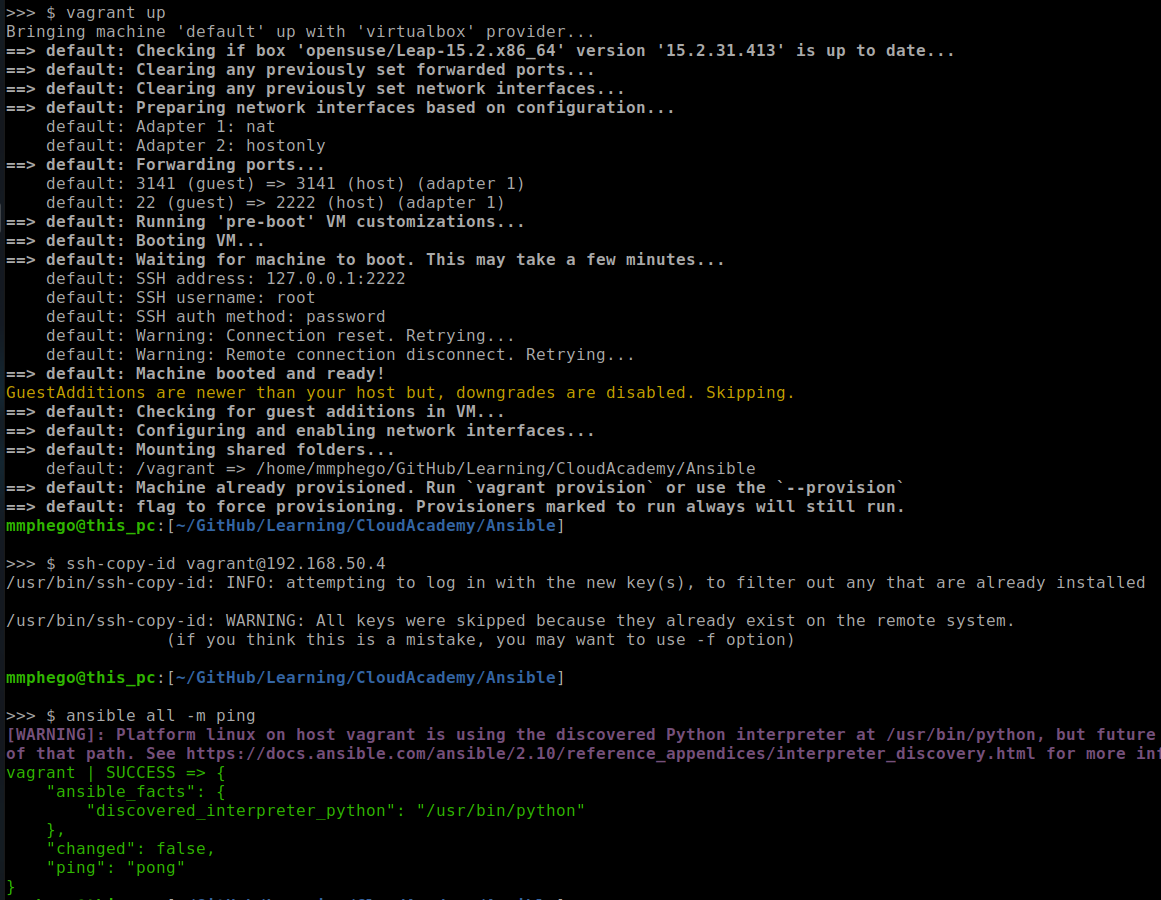 Roles let you automatically load related vars, files, tasks, handlers, and other Ansible artefacts based on a known file structure. After you group your content into roles, you can easily reuse them and share them with other users.

An Ansible role has a defined directory structure with eight main standard directories. You must include at least one of these directories in each role. You can omit any directories the role does not use.

Using the ansible-galaxy CLI tool that comes bundled with Ansible, you can create a role with the init command. For example, the following will create a role directory structure called pypi_server in the current working directory:

By default Ansible will look in each directory within a role for a main.yml file for relevant content:

We defined our playbook which deploys the PyPI server below.

I found these posts relevant to the way we set up our nginx_reverse_proxy:

This is a simple tester for PyPI upload procedures. I modified simple_test package that was downloaded from https://pypi.org

In this main.yml file we have a list of tasks that the role executes in sequence (and the whole play fails if any of these tasks fail):

Note: These tasks are executed on the remote server, in this case, a vagrant box.

Below is the main.yml which details the configuration, deployment and testing of the PyPI server (in a vagrant box).

You can also check out my over-engineered Makefile here.

Accessing your FQDN you should see the devpi home page listing your indices: 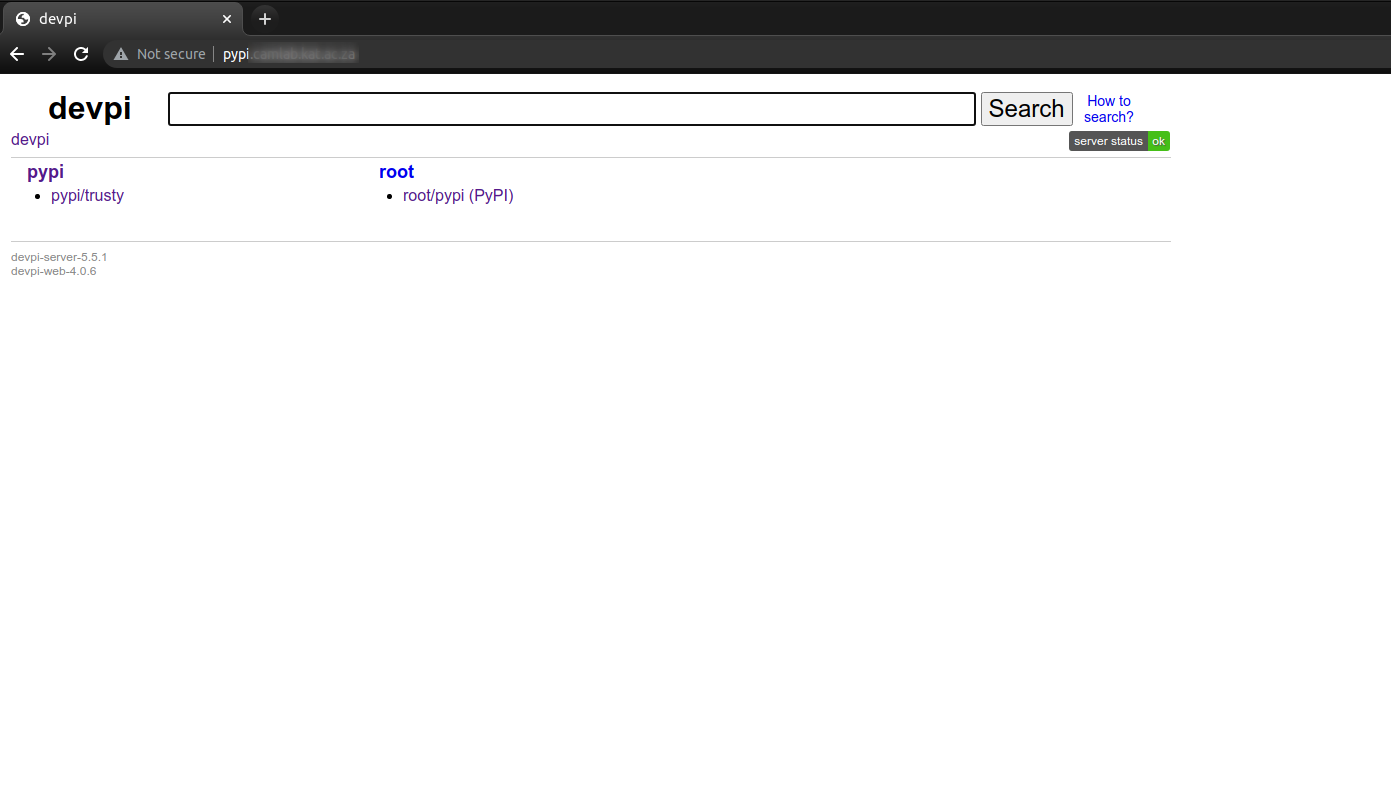 Assuming that everything was set up correctly. You now have a local/private PyPI server running in a Docker container that is under config management, thus ensuring deterministic builds and a single command can tear it down or bring it up.

This was a great Ansible and Nginx learning curve for me and if you have reached the end of this post. I appreciate you!