How To Configure Distributed Tracing With Jaeger On Kubernetes Cluster

In the previous article titled How To Configure Jaeger Data Source On Grafana And Debug Network Issues With Bind-utilities. I described how to configure Jaeger on Grafana but I did not go into the details on how we can use Jaeger tracing on an application.

If you did not read the previous article, please do so now before we go down the rabbit hole.

To understand better let’s quickly visit our not so distant past, most applications are a built-in single-contained monolithic system where the application would execute in order of operations down a pretty clear path as shown in the image below.

First, the user would send a request which would be received by a load balancer, and then route it to the monolithic application and finally the database. As we want to know the request latency, we would want to trace it on the way back. The monolith has all the application services bundled into one block this is a good example of monolithic tracing.

Now if we consider distributed tracing where we use microservices and in which they are all decoupled, the transaction path will be very different. The transaction occurs across several distributed services, this is illustrated in the image below.

Similarly, the user would send a request which would be received by a load balancer. But in this case, we don’t have a monolithic application. We have a whole set of microservices. The question is now, how do we trace through these distributed services?

Well, distributed tracing allows us to follow the request as it goes through the various services to the database and of course, the trip back. From the image, you may notice that not every service was hit because, for that specific request, it probably didn’t need those other two services.

This is a very common scenario, and we can use distributed tracing to trace the request through the various services therefore we’re able to trace these very separate microservices and still get relevant latency information.

End-to-end distributed tracing platforms start collecting data as soon as a request is initiated, such as when a user fills out a form on a website. This causes the tracing platform to generate a unique trace ID and an initial span, known as the parent span. A trace represents the entire execution path of the request, with each span representing a single unit of work along the way, such as an API call or database query. A top-level child span is created whenever a request enters a service. If the request contained multiple commands or queries within the same service, the top-level child span may act as a parent to child spans nested beneath it.

To understand what spans and traces is let’s look at the definitions as described by opentracing:

Before we go deeper into the details of how to use Jaeger, read the Jaeger docs.

Back to the reason, I started this blog post. before I go deeper into the rabbit hole This post will detail how to deploy a demo application called Hot R.O.D (Rides on Demand) that consists of several microservices and illustrates the use of the OpenTracing API. It will be deployed in a k3s cluster with Jaeger backend to view the traces. Read more about the app here

If all that does not ring a bell, check out my previous post on How To Configure Jaeger Data Source On Grafana And Debug Network Issues With Bind-utilities.

Before you continue, ensure that you have the following:

First, we need to create a namespace for the Jaeger backend, a dedicated directory for the Kubernetes YAML manifests.

Then we need to create a hotrod Jaeger instance as hotrod-traces and update the hotrod-traces-query Jaeger-operator YAML manifest to change ports from the default configuration into nodePort, which will enable us to expose the Jaeger backend on a port 30686.

After creating the hotrod.yaml manifest, we can deploy the Jaeger backend and confirm that the service is running as shown below.

Assuming that everything is running as expected, we can access the Hot R.O.D application but since we used Kubernetes LB and did not configure a static port we will use it to access our application. We will need to find the port that the service is running on from the hotrod service using the command below.

Note: This port will be randomly assigned by Kubernetes.

Once we have the port, we can access http://localhost:30415 from the browser before issuing requests which would trigger Jaeger to record the traces.

On the second tab, we can open http://localhost:30686 to see the traces that were recorded by Jaeger on the UI.

In the Jaeger UI, you can see the traces that were recorded by Jaeger.

The images below show various services and their spans. 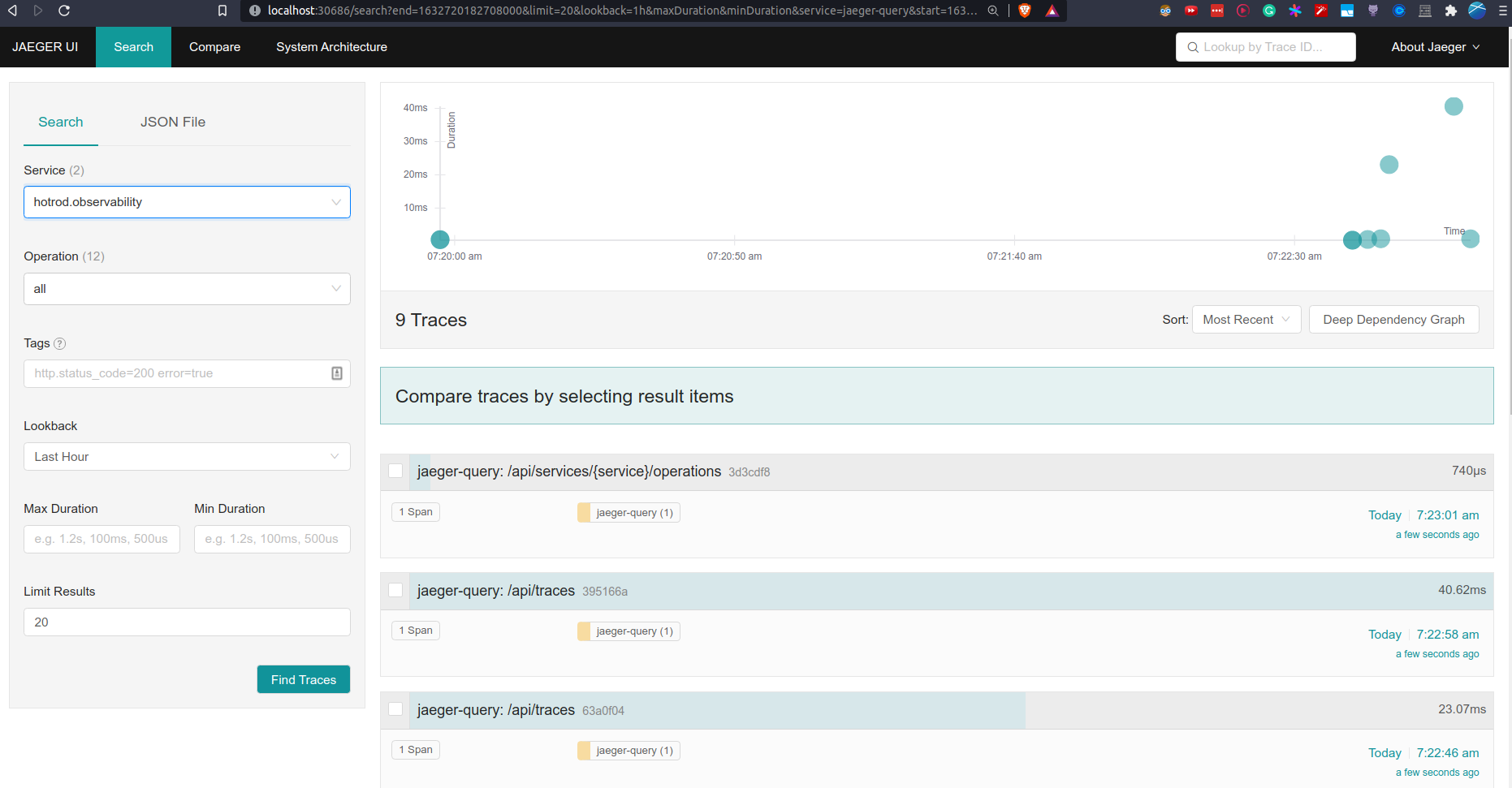 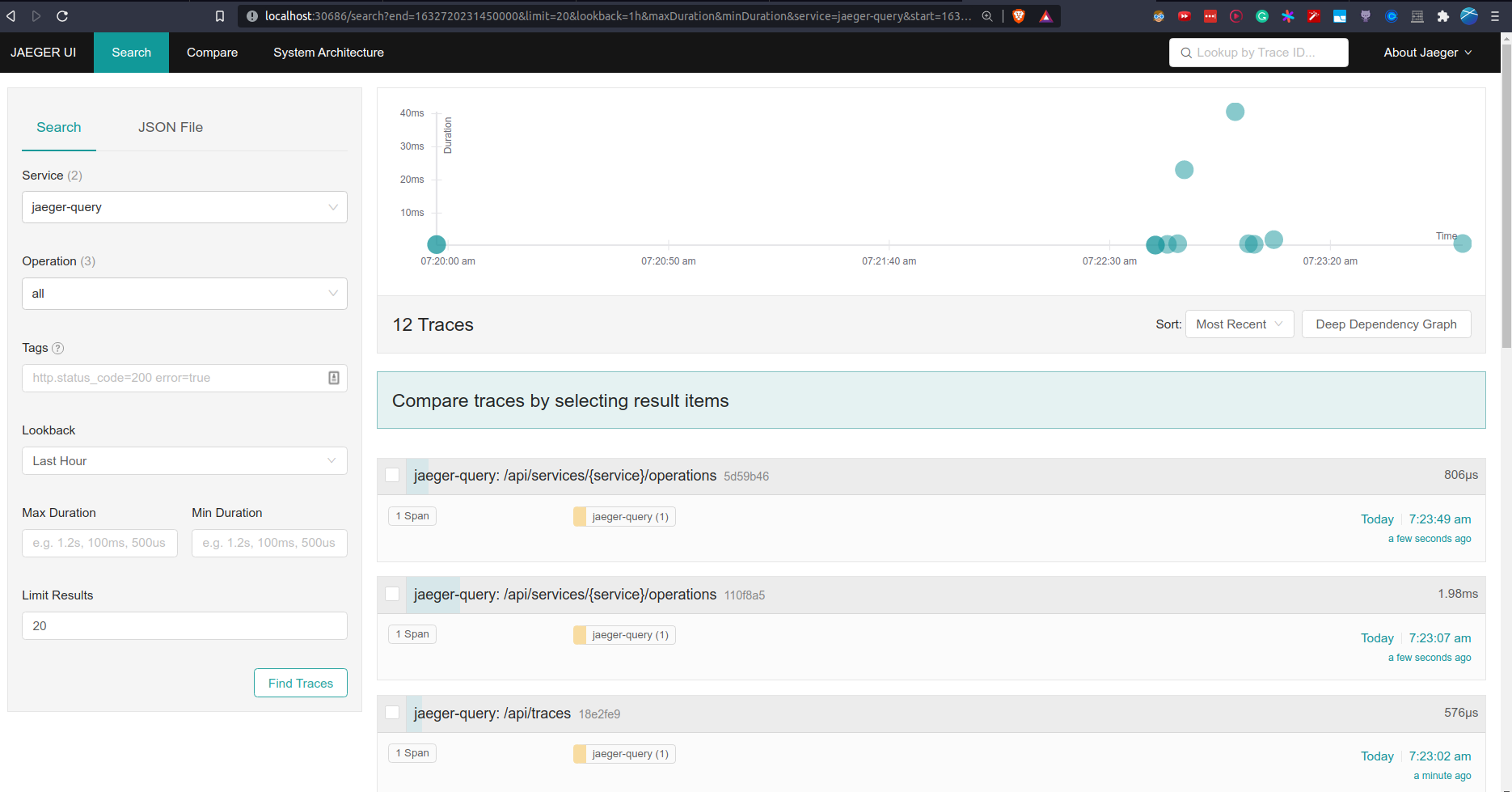 If you want to understand more about the data in the images above, I recommend you to read this article titled Take OpenTracing for a HotROD ride as this is beyond the scope of this post.

In this blog post, we covered a few topics related to Jaeger and how distributed tracing differ from monolithic tracing. How one can set up a simple distributed tracing system in Kubernetes and deploy a simple microservices application before using Jaeger tracing to understand how long requests take to complete thereby improving the application performance.